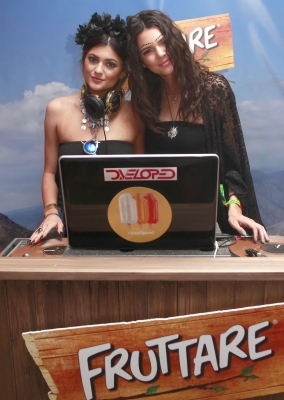 The Wrap: Bumble users will be invited to mix with celebs, VIPs and snow in the desert on April 15 and 16 in Rancho Mirage.For years, the Jenner clan has made it rain. Now, with dating app Bumble, they’re going to make it snow… in the desert.
On Saturday, April 15 and Sunday, April 16, Kendall Jenner, Kylie Jenner and Ashley Graham are set to host two-days of pool parties at a Rancho Mirage, California mansion that Bumble, the social and dating app where “females make the first-move,” will convert in to a winter wonderland with real ice and snow, The Party Report has learned.
“Winter Bumbleland” is the first major event announcement of parties drafting off of (though unrelated to and not endorsed by) the nearby Coachella festival. Lady Gaga, Radiohead, and Kendrick Lamar headline the festival, which is only a month away.

Had Bumble done this in 2012, when temps dipped in to the 30’s on the festival’s opening weekend, they could have cut their snow and ice budget.

For clarity, there are no “official” Coachella parties beyond the festival itself, but a multi-million dollar shoulder economy of parties drafting off of the festival crowd has grown roots over the last ten years. The most common marketers are apparel brands kick-starting the summer season of consumer fashion spending and liquor brands.

All events tip-toe around their messaging by positioning their events with legal hide-and-speak like “during music’s big weekend in the desert.”

Identical twin sister DJs Simi Haze and (24-year-old card-carrying members of the Jenner posse) and multi-hyphenate Hannah Bronfman will man (or…woman) the turntables on Saturday and Sunday, respectively, for the female-first network that has 12 million users.

Bumble expects a large crowd through the gates and over the bridge of their 3-acre estate on the afternoons of Saturday, April 15 and Sunday, April 16.

The crowd sipping drinks and wearing flip-flops in slush won’t be restricted to the L.A. social set of celebs, socialites and cultural captains with Instagram followings north of 50,000.

During the week of April 10, Bumble will geo-target its Southern California users, telling them to “swipe-right” on the “Winter Bumbleland” party invitation to attend. Unlike promoters who scour social feeds for the most telegenic, the organizers will not be “casting” for RSVPs. It will be a “first come-first served” scenario.

The aforementioned L.A. scene will get separate personalized invites.

What’s Barbara Corcoran and Aly Raisman Have to Do With This?

What started as a dating app, has now expanded to platonic social and business networking, with Bumble BFF (for platonic same-sex friendships for newbies in a new locale) and business connections with a platform called “First Movers.”

Launched by Tinder co-founder Whitney Wolfe and based in Austin (where they have multiple events this week during SXSW), the app is doubling down on its commitment to music with this first engagement around the festival.

From One Reality Royal to Two Others

For the Jenners, the current royals of reality TV, it’s fitting that Bumble chose this Rancho Mirage estate for the party’s venue. It’s owned by one of the creators of the longest running reality show on network TV, “Cops.”

If the Jenner clan likes what they see, they could buy it; it’s on the market now for $5.5 million.