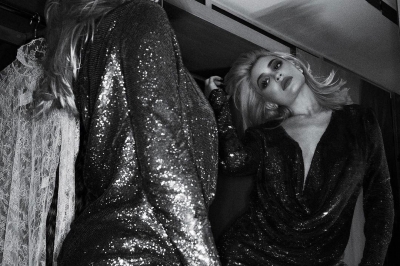 Why 19-year-old Kylie Jenner is one of the Most Creative People in Business 2017.

“I’m always thinking about what I want, and what I think people want,” says makeup mogul Kylie Jenner.

Seconds after Kylie Jenner launched her first three lines of lipstick, on November 30, 2015, all three sold out online. Less than two years later, Kylie Cosmetics is a full-service, direct-to-consumer beauty brand, with offerings that include its signature lip kits (lipstick and liner) plus eye shadows, blushes, and tools. The 19-year-old Jenner, famous for her own perfectly plump pout, continues to draw upwards of 10 million people to her Snapchat makeup tutorials and has led the brand to a reported $400 million in revenue since its launch. That’s why Jenner is No. 57 on our list of the 100 Most Creative People in Business 2017.

Fast Company spoke with the youngest member of the Kardashian-Jenner clan about how she creates those lust-worthy lip kits and what she’s learned so far from building out her own niche in an infamous family.

Fast Company: Why go into makeup?

Kylie Jenner: I can’t leave the house without lipstick. Everyone was so interested in the color I was wearing. But nothing was ever perfect for me. I just thought, Why not make my own lip kit with a liner and lipstick?

FC: You sign off on every decision at your company, plus you’ve got season 13 of Keeping Up With the Kardashians, your own upcoming show, and personal social media accounts to maintain. What’s a typical day on the job for you?

KJ: I wake up and immediately check in–what orders are coming in, what’s selling the best. My manufacturer brings me products every day. I have a spot in my house, my creative room, and we just have meetings after meetings.

FC: What goes into creating a new lipstick?

KJ: I’m always thinking about what I want, and what I think people want. For example, the smell of the lipsticks–I knew I wanted something sweet. I was in the lab, and they gave me 12 options, and I picked my favorite. Then we did the percentage: “Do you want 50% or 75% smell? Do you want it strong or weak?” It took a long time. Then on Instagram, I’m on my Kylie Cosmetics [page] all day curating it. It has to be perfect.

FC: How has social media played into your marketing strategy?

KJ: I don’t pay for advertisements. I don’t do commercials. Social media is the only way I push it: Snapchat, Instagram. I’m usually the one posting everything, but I have another girl who’s on the team who helps out sometimes if I’m busy. Sometimes I delete all her pictures. I’m like, I don’t like that, it needs to look like this.

FC: Kylie Cosmetics products aren’t sold in traditional stores, but your pop-up shops draw tens of thousands of visitors. How do you prepare to release a new product?

KJ: Everyone knows when I’m releasing a product on Snapchat that I will be MIA for the next hour and a half. I’m running around my house, finding the perfect lighting, the perfect swatches. My housekeeper, I use her arm for my Snapchats. She has the best arm for swatches. She’s so nice and just sits there and has her arm ready and lets me do my thing. I care a lot about what my products look like when people first see them.

FC: When things go wrong with packaging, shipping, or other product-related stuff, it tends to be publicized widely by customers on social media. What do you learn from those issues that come up?

KJ: People will tweet me and be like, “Kylie, how dare you! Kylie, how could you do this?” People know who is behind the curtain, they know it’s me, so they attack me sometimes. But things happen, and I have to understand that and learn from that. It’s a new business, and I’m going to make mistakes. Kylie Cosmetics blew up so fast that I didn’t have that much room to make mistakes. Starting businesses make a thousand mistakes, and no one ever sees them. Everyone on my team tries their hardest to not make any, because they know it goes back to me.

FC: What’s it been like to have something that distinguishes you from your high-profile family?

KJ: I used to ask my mom, “What’s my thing?” Kendall has modeling, what’s my thing? And I’m just so happy that now I have this. It motivates me every day. I want to expand into a full cosmetics line–foundations, concealers, everything under the sun.

A version of this article appeared in the June 2017 issue of Fast Company magazine.