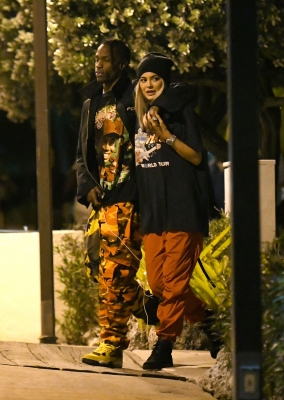 Glamour: Kylie Jenner and Tyga recently split, but it seems like the reality-star has already moved on with Travis Scott. Especially since the pair were seen cuddling up in Miami.

Kylie and the rapper Travis Scott were first seen holding hands at Coachella, having the best of times, and now photos have emerged of the new couple arm in arm in Miami for Travis’ performance at Rolling Loud Festival held in Florida’s Bayfront Park.

Travis, 25, had his arm around the 19-year-old and the pair’s hands were interlinked.

When the pair were first linked at Coachella, Kylie took to Instagram to share a snap of the festival, laying on the grass with Travis and some friends.

Call it a festival fling or a new romance, Kylie’s single life has been treating her well. Aside from the desert parties, she has been out and about enjoying her friends, crashing proms, working on her own reality show, and promoting her new lip-kit collection in collaboration with her big sis, Kim Kardashian-West.

Who has time to cry over men anyway – when you’re a Jenner? Not Kylie.

Kylie and Tyga had been in an on-off relationship since 2015. Travis has previously dated Rihanna, and they were together for nearly a year (before her rumoured relationship with Drake).

Gallery updates: candids from may